The welding community lost a special person when Dan Wellman left us.  It was those in his welding family that saw the character and grace under pressure that we all came to know and love.  It left an indelible mark on us all. 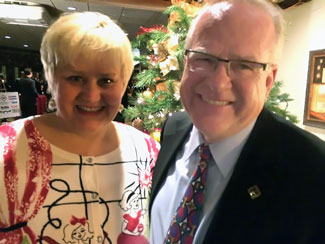 Dan joined AWS in 1982.  With the help of an AWS scholarship, he graduated from the welding program at Schoolcraft College.  Capable of talking to anyone in the industry, he did so with much enthusiasm and depth of knowledge. Dan was first appointed to the Executive Committee in 2008 Mike Karagoulis as chairman. His appointment is a little unusual because he had not previously involved as an Executive Committee candidate. Appointees and newly elected members were generally given roles that allowed them time to learn their way around and figure out where they would best fit. It is also beneficial to not scare away prospective Executive Committee members with onerous assignments right out of the gate. Dan did not need either consideration. He hit the ground running with two significant assignments – Bulletin Hotline Editor and Recording Secretary. At the same time! That was his style. Always willing to jump in with both feet to get essential tasks done with little fanfare. He was elected to the Executive Committee in April 2009, elected as 3rd Assistant Secretary one year later, and served as Chair in 2014-2015.

Dan earned the respect of his peers for the way he conducted himself in both his business and personal life. His impact on AWS Detroit and the welding community will be long lasting. The example he set and his hopes for the future will not be soon be forgotten.

Dan held just about every office within the section, and helped with practically every event.  Because of this hard work and dedication, his peers recognized Dan on numerous occasions, both for his contributions to the industry, and the society. These awards include:

Dan exemplifies an AWS success story; someone the industry invested in with scholarship money early on, who entered our business with lifelong ambitions and paid back AWS repeatedly for many years with time, talent and treasure.  He was truly “one of ours” and “one of a kind.”